I listened to “The Algebra of Happiness” by Scott Galloway recently. There wasn’t much that was new as it was a compilation of posts from his weekly blog – “No Mercy, No Malice” that I’ve enjoyed reading over the past months.

I’ve shared a few of his posts from time to time as I find his writing a nice mix of interesting, provocative, and heart warming. Amidst notes with strong points of view and occasional humble bragging, there is plenty about the struggles he’s faced and continues to face. The struggle to be a better son, father, friend, teacher, and citizen.

It is that struggle that makes life interesting and challenging all at once. And, I’m glad he shares that. Those are the sorts of notes that help put things in perspective.

My notes from the book are sparse. But, as I look back on what I’ve taken away, there are three notes that resonated.

First, Prof Galloway observes that hard work and a lack of balance early in a career has a disproportionate impact later. In the early years, speed helps. There’s no right way to do this – only we can decide what trade offs make sense for us.

Second, the ratio of how much we sweat to watching others sweat is a leading indicator of success.

And, third, the most important decision we make is who we marry – if we decide to do so.

It strikes me that one of the biggest challenges we face is reconciling our desire to be successful by societal definitions while not giving up on being successful by our definition.

The challenge lies in the fact that extrinsic measures tend to be breadth focused (e.g. number of customers/successful exits/employees) while the stuff that make us feel intrinsically successful tend to be depth focused (e.g. deep relationships, immersive experiences).

Anyone who has built products or services has faced this in their work. It is much easier to move vanity metrics than it to create meaningful impact.

The answer, in work and in life, isn’t to shun extrinsic measures and breadth. We need some of it to ensure it doesn’t get in the way of us getting to the intrinsic stuff.

The challenge, however, is not being so sucked in by the allure of breadth and scale that we forget that its main purpose is to enable the depth we really seek.

Put differently, the optimal strategy tends to be to do things that scale easily so we can then spend more of our time doing things that don’t scale.

There’s been a fair bit of media outcry (in the United States) on all sides of the aisle around wealth of late. The issue at the heart of most of the outcry is that it seems wealthy folks, with few exceptions, want to be termed self made. And, no one (again – with few exceptions) wants to acknowledge the role privilege played in their success.

Amidst all this noise, The Atlantic shared an important interview with two British researchers who decided to immerse themselves in the cultures of workplaces in four settings – a TV-broadcasting company, a multinational accounting firm, an architecture firm, and the world of self-employed actors. Here are two ways in which they found privilege to show up.

First, financial cushion enabled actors to take low paying jobs to get their start while also enabling others to take important unpaid internships or to live in a city like London where there are more opportunities. Imagine attempting to do any of this with the pressure of having to support a family or pay back debt.

Second, at work, they found it easier to find sponsors who found themselves reminded of themselves while also finding it easier to understand the unwritten norms that folks who are relatively unexposed struggled with.

Of course, this won’t make for a popular media story. Forbes, for example, has a category in their billionaire lists called “Self made who got a head start from wealthy parents and moneyed background.”

But, this research is a start. In time, I’m hopeful we’ll begin to see a lot more data that points to the massive role privilege plays in success. We need to stop downplaying its role so as to build systems that result in broader equity and access.

It will take time. But, I’m optimistic we’ll get there.

PS: I haven’t read this yet – but the authors mentioned above have written a book called “The Class Ceiling: Why it Pays to be Privileged”

PPS: A reminder on how I think about privilege and success. 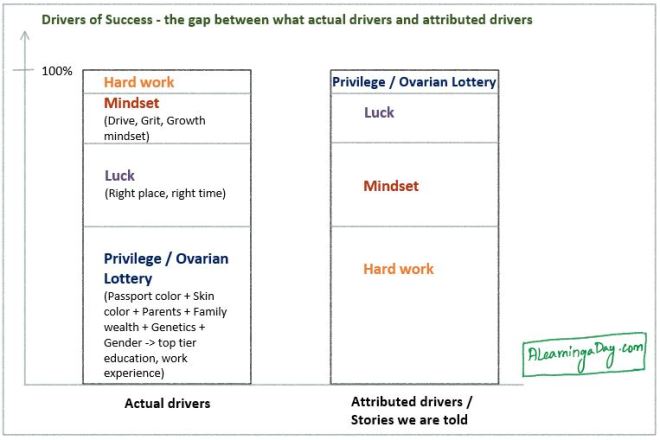 It is always amusing to see the gap between actual drivers of extrinsic success / wealth and attributed drivers. We have a need to believe in romantic stories of hard work and heroic mindset and are painted these pictures in the stories we are told.

In reality, however, the biggest driver of extrinsic success / wealth is privilege by a long shot. Luck and mindset matter – but, privilege is the platform on which it is built.

Acknowledging the real drivers is the first step to building systems that provide better access to opportunity to those who don’t have it.

Source/Note: This image is a working hypothesis/theory after years of obsessing about this topic, studying success, and writing about it..

“We learn more from failure” is one of those problematic pieces of common knowledge we hear from time to time. It is problematic because it is a self fulfilling prophecy. We expect to learn more failure and, so, we do.

We don’t learn more from failure because failure has some magical teaching quality. We learn because we take the time to reflect on it, understand what happened, and learn lessons that drive change in how we approach our work/life.

If we deconstructed success and obsessed about its causes the same way we do with failure, we could learn just as much from it. But, that doesn’t happen because common knowledge tells us to celebrate success instead of learning from it.

We can change that.

One of the constants in competitive sports is hearing about wonder kids. The other constant is the fact that most of these wonder kids don’t make it. I’ve been reading excerpts from a book called “Next, Next Big Thing” that profiles 15 such football/soccer wonder kids and the stories in there are very poignant.

The wonder kids share powerful stories about their journey exposing various factors like injuries, a bad relationship with a coach, personal problems, timing, etc., that got in their way of becoming top flight footballers.

The stories reminded me of a chance conversation in London with a train ticket inspector who was an Academy player at Chelsea football club. He shared that most of the high potential kids stop playing because of injuries. The ones who emerge are either lucky to avoid them or have incredible mental strength to find a way back.

Similarly, reading each excerpt has been a profound reminder of both the importance of mental strength when the chips are down and the power of luck in shaping any success.

While we tend to have plenty of conversations about the former (“grit,” “perseverance,” etc.), we often neglect attributing our success to the latter. Perhaps we should… and perhaps we’d appreciate what’s good in our careers a lot more when we do.

Tomas Tunguz, a venture capitalist at Redpoint, has an old and interesting post about what a dog and a monkey that taught him about management.

When he was at Google, the 75 person AdSense Operations team used to gather every week for an All Hands. And, along with an update on how they were doing, the meeting always features two stuffed animals – Whoops the monkey and Duke the dog.

Whoops helped create a culture that value learning, openness and support and Duke ensured collaborative effort was recognized and celebrated.

I’ve seen variations of “Duke” in meetings over the years. But, I’ve rarely seen the equivalent of “Whoops.” I can see how it would be a powerful way to encourage a growth mindset. I’d love to give it a try.

Success isn’t an objective term. It only exists in our head. To make peace with an idea that can seem very elusive, we must define it on our terms.

Dan Kim, a programmer at 37 signals, wrote yesterday about a quote from Marissa Mayer that infuriated him – “My husband [the venture capital investor Zachary Bogue] runs a co-working office in San Francisco…And if you go in on a Saturday afternoon, I can tell you which startups will succeed, without even knowing what they do. Being there on the weekend is a huge indicator of success, mostly because these companies just don’t happen. They happen because of really hard work.”

Dan picks apart that comment – I can see where his frustration comes from. As a father who cares about spending time with his kids, he hates the “work on weekends to be successful” message.

We tend to be hugely biased by our own experiences. So, I can also see where Marissa Mayer comes from and what her biases are. I don’t agree with them but, hey, what do I know?

Dan, however, goes on to end the post by saying something that rings very true. He points out that Marissa Mayer is very successful by most objective business measures – finances, title, industry stature, etc. He then goes on to acknowledge that, while he will never be a success in Marissa’s world, he’s never been so happy to be a failure.

It is a realization we must all come to at some point in our lives. It is often the difference between a life that is happy and one that is filled with insecurity and discontent.

That isn’t to say we shouldn’t pursue things that matter to us. Happiness and success lie in the pursuit. It is just a reminder to not spend time chasing someone else’s dream. Let ours be a life well lived… on our terms.

I’m sure you’ve heard about or asked that famous question – do we learn more from success or failure?

Let’s put that question on hold for a moment for a quick question – I had submitted two assignments recently. I scored well on one and didn’t score well on the other. Guess which one I wanted to review?

This isn’t uncommon – the issue with debriefing after success is that there is almost no patience to make them meaningful. A debrief after a failure feels like a necessary post-mortem. A debrief after success feels like attempts to delay the party. Success, in short, makes us lazy and complacent. It makes us want to celebrate and then come back and get the next success (sometimes without putting in the work). Reflections after success can be as rich as those from failure. Just because failure makes learning seem more important doesn’t mean that it is. Perhaps that is why discipline is often cited as a key success ingredient – it takes discipline to overcome the resistance and get on with the reflection and learning.

And, of course, we can avoid the whole discussion by learning to ignore the result and focus hard on the process. Good decisions and a good process => good results in the long run. Reflecting on the process is an easier habit to instill and your process can almost always get a bit better. That’s when it stops being about winning and losing. A process focus is all about the playing.

Welcome to the infinite game.