One of the fascinating things about the COVID-19 crisis is that it has been a global leadership test.

It involved humans – with all our idiosyncracies – needing to come to terms with an invisible enemy that we learnt was capable of rapid spreading and devastation.

Faced with this, in the so called “developed” world, we saw three kinds of leaders emerge.

The first kind chose to quickly come to terms with reality. In doing so, they listened to their leading scientists and medical professionals and immediately enforced mandatory shut downs. They then set up their local leadership to enforce contact tracing and face masks while setting expectations that the economy would only reopen when cases went down.

They chose to tell their people the hard truth upfront and take actions that were painful in the short term. And, when the reopening after the first wave happened, it went relatively smooth.

As a lot of the early commentary around nations like South Korea touted their experience with SARS to be the major factor, I thought I’d pick Germany and Italy in category 1. Italy was hit first, had a brutal first few weeks, and had to learn quickly. But, learn they did.

Germany were a touch more prepared. But, let’s take nothing away from the masterclass in fact based leadership that Angela Merkel delivered. 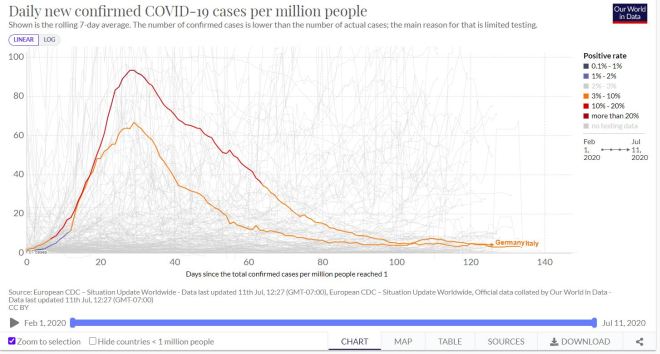 The second category decided the scientific approach was too conservative. They believed governments needed to weigh the trade-offs of public health and the economy and decided to experiment with unconventional approaches. The UK initially thought they’d try to get to herd immunity while Sweden refused to enforce a lock down.

The test results have now confirmed that these experiments were expensive/dismal – depending on your point of view. Per million people, Sweden has suffered 5-10x more deaths than its neighbors with just as much economic damage.

I expect these leaders to see the wisdom in the German approach and just adopt the Merkel playbook in the coming weeks.

The third category is a special category defined by the United States. The approach here was – ignore the facts, focus all decision making on short term wins that will maximize chances of winning the election in November, present a wildly positive/self congratulatory outlook, and pretend the problem will go away.

This approach started off looking rather promising thanks to the decentralized structure of the government and the fact that the early crises were in States with governors who tried to replicate the Merkel playbook. But, it was always only going to be a matter of time before the full impact of a leader who has thus far refused to take responsibility (this timeline ends in May) was realized.

So, just as deaths from the first wave looked like they’d be headed down, we began to see a resurgence coming from states that had decided to work with the “pretend it will go away” playbook. 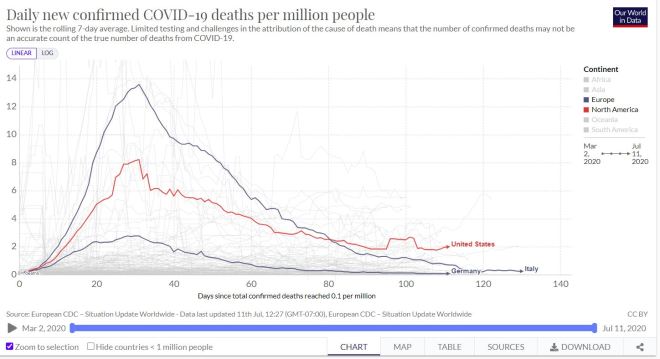 The consequence is a chart of new cases that looks like this.

And, while a combination of heroic efforts from the healthcare system combined with demographics (older populations = higher death rate) have kept the US death rate relatively low, we’re still talking about 4.2 deaths out of every 100 people infected.

Sadly, though, I expect the positive news to end there. As deaths are a lagging indicator and as we’re far from flattened curves in states like Florida, I expect the death rate to go up in the coming weeks along with a devastating increase in the total number of deaths. As is the case with these predictions, I really hope I’m wrong.

To bring all this home, here’s a simple stat about new cases that stuck with me. It took 99 days for the first million cases in the US, 43 for the second million, and 28 for the third million.

I have many reflections from spending time with this data. But, as this post has already run long, I thought I’d share my top three.

First, if it isn’t evident yet, for those of us living in the US – we are living in the most dangerous place in the developed world and among the more dangerous places on the planet. I hope you’re mentally preparing yourself for a rough 12-18 month ride. I have begun doing so.

Second, science/facts/truths don’t care if we believe in them. They are what they are. Relatively to the climate crisis, this pandemic is actually a much more tractable problem. To see us stumble the way we have is scary. I am hopeful we will learn a few lessons when all of this over – at least in the type of leadership we elect.

Third, leadership matters. And, needless to say, elections have consequences.