Knowing what I know now about the process of learning, I’ve come to realize that a more apt name for this blog is “a reminder a day.”

As “To learn and not to do is not to learn,” it is impossible to improve how I operate every day. Instead, what I do here is attempt to take small steps toward larger commitments – one reminder at a time.

While some easy lessons were learned after a few reminders, the hard ones took hundreds of them, and the hardest ones are still being worked on.

It takes time to learn lessons that make us happier and better. And, few things matter more in that process than persistent reminders.

We read about the “Seek” by iNaturalist app a few weeks ago and have been using it a bunch of late. If you’ve ever wondered about the names of the plants/trees/insects around you, this app is awesome.

Here’s how it works –

1. Open up the app and point the camera at any plant (for example)

2. Using image recognition, it’ll give you the name of the species with a confidence score.

3. If you’re unable to get it on first try, you just have to try a few different angles. For example, a closer view of the the leaves of a plant may help it identify it easier.

It is a wonderful application of image recognition. And, we’ve been using it to identify plants and trees all around us.

I also love that it is called “Seek.” In the world we live in, knowledge and wisdom are never more than a few taps away.

All we need to do is seek.

One of the most fascinating things about kids is that they manage to experience pain without burdening themselves with the memory of it.

They may be crying one moment and then laughing the next. No big deal.

Most adults, instead, tend to go through difficult experiences and accumulate baggage. And, with that baggage, we lose the emotional flexibility that enables us to recover quickly from setbacks.

Much to learn, we have.

A question for how well those meetings we scheduled went this week: In what percentage of those meetings did the group leave with more clarity on the topic at hand than when we started?

Whenever that percentage dips below 80%, it is a sign that the next steps are cutting the number of meetings scheduled to spend more time preparing for the ones we do keep.

I took two quick decisions recently based on my instincts. They had differing levels of risk  and made me reflect on the process. Three things I took away.

First, I found myself thinking about the insight I’d shared from Rory Sutherland’s book about how we evolved to have a rational brain because rationality gave us the ability to explain our instinctual/emotional reactions. In this case, I was going through the exercise of trying to explain my decisions to myself (and a friend who I was in conversation with). It was fascinating to observe myself trying to back out the implicit reasoning.

Second, embedded in these instinctual actions was some interesting subconscious reasoning. If I had attempted to do all of this consciously, there is no way I’d have taken these decisions in time. So, it was fascinating to realize just how much our instincts process.

Third, it remains to be seen if my instincts were right. Time will tell how these work out. Regardless, there was a lot to learn from the process. For instance, there were a couple of things I’d like to tweak about how I acted on these instincts. So, even if that ends up causing one of them to backfire, I am at least glad I followed these instincts as I’ve regretted not following them a lot more than when I have actually followed them.

Learning is guaranteed either way.

Living through the day-to-day is a lot like running through uneven terrain.

On some days, we find ourselves running downhill with the wind behind our backs.

On some others, we find ourselves on a flat stretch – our speed is what we make of it.

And, on the remaining, we experience the challenges of running uphill – perhaps even with the wind against us.

In the long run, however, these difficulties in terrain even themselves out.

Our progress, then, is just dependent on whether we chose to show up every day, regardless of the terrain, and run.

Researchers Bell, Chetty, Jaravel, Petkova, and Van Reenen studied data from the lives of 1.2 million inventors/patent holders in America in an attempt to understand the impact of nature and nurture. The found that –

1. A child’s chances of becoming an inventor vary sharply with characteristics at birth – such as their race, gender, and parent’s socioeconomic class.

2. Children from high-income (top 1%) families are 10 times as likely to become inventors as those from below-median income families. These gaps persist even with similar math test scores in early stages (highly predictive of innovation rates)

3. Children whose families move to a high-innovation area when they are young are more likely to become inventors.

4. Girls are more likely to invent in a particular class if they grow up in an area with more women (but not men) who invent in that class.

This study is a landmark study in its ability to explain the real drivers of of success. Talent and mindset play far less important roles than the stories we’re told would have us believe. Below is my hypothesis on how it actually works. (Based on the data from this study, it may well move from completely unscientific to being backed by some science. :))

Talent, it turns out, is well distributed, privilege is not.

Every once a while, we stumble on a piece of music that makes us stop everything, pause, and appreciate everything we’ve been given. “Memories” by Maroon 5 did that to us this past weekend.

We ended up playing the song on repeat for more than hour, shared it with friends and family, and savored it with mentions of memories from the past and the memories we were creating as we listened.

Great art facilitates connection. This did so for us.

An item on my “to write in a long form post” list that I haven’t been able to get to in the past months is a post on the climate crisis. I wrote long posts on the topic ~2 years ago and a lot has improved in our understanding of the problem (hint: it is a tougher and bigger problem than we initially thought). So, instead of attempting to synthesize all the great stuff being written on the topic, I thought I’d attempt to curate the most important 5 posts I’ve read on the topic for anyone looking to get up to speed.

1. Amasia and the Climate Crisis – The Facts by Ramanan Raghavendran (link). The Amasia team (a venture capital firm) have done a fantastic job synthesizing the facts on climate change in one post. If there’s just one insightful post you want to read to understand the facts, this is it.

2. The state-of-emissions of greenhouse gases by Our World in Data (link). As Ramanan and team detail in the above post, richer countries have contributed disproportionately to this problem. I’ve gotten a bit of heat from some of you in previous posts where I’ve called out the current US administration for inaction on the problem. The chart below hopefully helps explain why – as the biggest contributor to emissions globally and the biggest per capita in the last 250 years (by a distance), taking some responsibility to find solutions isn’t an unrealistic expectation in my book. 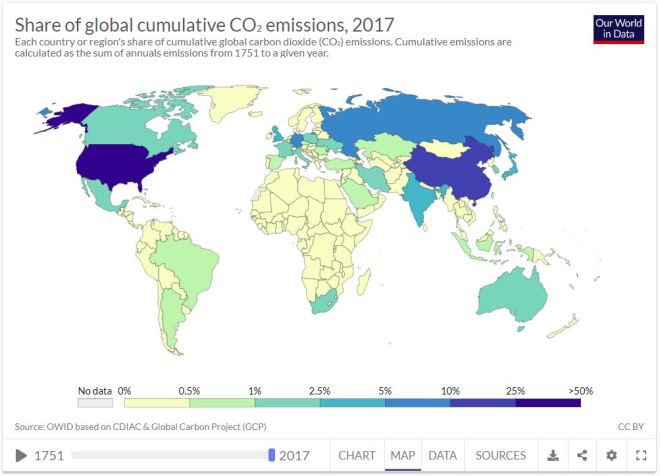 And, second, while our politicians would love for us to point fingers at “them” (take your pick on whoever “they” are), we all share the planet and we emit a lot of greenhouse gases collectively. We’re in this together.

3. The Scientific Consensus on Climate Change by NASA (link). The top scientists in the United States shared their take on the climate crisis to the world. They detail causes, evidence, and effects in this very thorough and beautifully visualized analysis. The biggest takeaway for us – we need to stop calling it climate “change.” It is a crisis.

PS: If you prefer reading research papers, here are two (1, 2) recommended by one of the most knowledgeable folks I know on the topic.

4. Scientists have been underestimating the effects of climate change in The Scientific American (link). If the above consensus didn’t give you pause, maybe this will. The authors of a book called “Discerning Experts” examined the research on the topic of climate and concluded that scientists have been consistently underestimating the effects of climate change. This is happening because scientists wants to be consistent with preceding research, worry about being labeled as alarmists, and view the data more conservatively (likely to be able to maintain optimism themselves).

5. So, what are the solutions? This all sounds pretty bad. What, then, are the solutions? As you might imagine, there is nothing definitive here – so, I have more than 1 link to share. If there were, there’d be nothing to discuss. :-) Bill Gates, now one of the leading thinkers and investors in this domain, believes the answer lies in tackling the various major drivers of emissions – electricity (25%), agriculture (24%), manufacturing (21%), transportation (14%), and buildings (6%). His post is here.

While there are many interesting technologies in the running to reduce or remove emissions in these areas, the technologies that experts are pinning their hope on seems to revolve around some form of carbon capture. Akshat Rathi, a reporter at Quartz, has been doing a great job covering progress on carbon capture and also has a good weekly newsletter called “The Race to Zero Emissions.”

There are, of course, reasons to be pessimistic. When I went down the climate crisis rabbit hole 2 years ago, I emerged with a sense of disappointment and despair at our efforts to understand the problem and respond to it. The progress we’re currently making is too slow – there is no doubt about that. And, the challenge with changing behavior today is that it has become a political issue in many places. Making something political is close to the surest way to prevent progress.

As a result, there are many who believe we’ll only be able to get over our petty issues/conflicts and begin to respond after a major negative event that will contribute to the loss of many lives. Sadly, as things stand, the odds of them being right are fairly high.

That said, optimism is a self-fulfilling prophecy. So, I think it is important to be optimistic. And, to that end, I’ll end with a key paragraph in the first link I shared from Ramanan’s/Amasia’s excellent synthesis.

Issues as large and widespread as climate change suffer from the paradox of rational choice: while it is collectively rational to take action in the face of climate change, it may seem individually irrational to make fundamental lifestyle changes due to the high personal cost and immeasurably small effect a single set of actions will have on the environment as a whole. The importance of change at the individual level, however, is far greater than most people recognise, and such change when taken up by billions will make a decisive difference.

I hope this round up helps.

I recently had the opportunity to ask someone who I’ve never seen frazzled how he maintains such equanimity.

He explained that he’s taught himself to keep a long term perspective. As a result, he recognizes that the highs and lows of today are unlikely to matter in the long term. And, if that is the case, there’s no point in being frazzled.

His response reminded me of an idea I’ve shared time and time again – you never know if a good day is a good day.

It was a timely reminder.