Was the invention of the axe a good thing or a bad thing? The axe was among the first simple machines — a breakthrough in technology that propelled humanity forward. It helped our ancestors chop wood and hunt. But, it was also used as a weapon in war.

Every incredible advance has had a dark side. We have prevented infant mortality thanks to advances in ultrasound technology. And, yet, the same technology was responsible for female infanticide. Industrial farming has helped us feed billions of humans with fewer humans involved in agriculture than ever before. However, it has also resulted in routine horrible treatment of farm animals.

Given this context, it is often amusing to see the discussion around artificial intelligence. We see talk of doomsday one day (“all the jobs are going away”) and techno-optimism on another (“AI is going to help us by freeing us from repetitive tasks”). Of late, I’ve been seeing more media devoted to the latter. It is worth examining both sides of the conversation.

Not doomsday. The central hypothesis behind the idea that there is no doomsday on the cards is the idea that we’re moving into a world with IA or “Intelligence Augmentation.” The idea here is that AI is great at finding answers. But, it is on us to find questions. We’ll find new and interesting questions to keep us occupied while AI helps us eliminate repetitive tasks and make us more efficient. And, we’ll use ingenuity to create new jobs that don’t exist — just as we created “Yoga instructor” or “Zumba instructor” jobs after the industrial revolution.

One example of this is a painting robot that was featured on Wired (see video — 4 mins) that increased the productivity of human laborers by 4x while taking over all the repetitive tasks. You’ve probably come across similar stories.

Maybe doomsday. From The Atlantic on WalMart’s future workforce —

Walmart executives have sketched a picture of the company’s future that features more self-checkouts and a grocery-delivery business — soon escalating to 100 cities from a pilot program in six cities. Personal shoppers will fill plastic totes with avocados and paper towels from Walmart store shelves, and hand off packages to crowdsourced drivers idling in the parking lot. Assembly will be outsourced, too: Workers on Handy, an online marketplace for home services, will mount televisions and assemble furniture.

Of course, it is also easy to counter all examples of optimism. For example, the same painting robot (featured above) that increased productivity of human laborers by 4x is a great place to start. At some point — assuming other painting firms invested in robots — we will have 4x the amount of painting capacity at hand. Are there as many jobs to go around?

And, the above OECD report that said risks of “massive technological unemployment” are overblown cautioned that we face risks of “further polarisation of the labour market” between highly paid workers and other jobs that may be “relatively low paid and not particularly interesting.”

This Economic graph summarizing some of the findings was particularly interesting.

Notice how the percentage of jobs at risk of automation decreases as a country gets richer?

The polarization that the report warns may not be limited to high skill and low skill jobs then. There is reason to believe that we might see a growing schism between richer and poorer countries.

The truth likely lies somewhere in the middle. All this brings us back to the story of the axe. Every technology breakthrough has a dark side. The challenge, then, is to not get caught in all the techno-optimism that accompanies the emergence of breakthrough technology and to take the effort to think through the second and third order consequences.

As we’ve seen in the revelations about the effects of social media in the past 2 years, the absence of such thought can have serious long term consequences.

So, how do we proceed?

My recommendation would be to stop any debate about whether we’re heading to an AI induced doomsday and, ask the three following questions —

1. Are we clear on what we’re talking about when it comes to AI? There are three major domains of AI that we discuss –

It is important to be clear about these domains because a lot of mainstream discussion bandwidth is wasted in talking about the dangers of Artificial General Intelligence. That is a waste of time.

Instead, our discussions should center around IA and II. We’ve made plenty of progress using techniques like Deep Learning. And, while both extend human capabilities, they also automate tasks that currently employ large groups of humans in the near term.

2. Are we conscious about the possible dark side of AI — specifically the use of artificial intelligence for surveillance?
The Economist outlined this in a piece about the Workplace of the future —

And surveillance may feel Orwellian — a sensitive matter now that people have begun to question how much Facebook and other tech giants know about their private lives. Companies are starting to monitor how much time employees spend on breaks. Veriato, a software firm, goes so far as to track and log every keystroke employees make on their computers in order to gauge how committed they are to their company. Firms can use AI to sift through not just employees’ professional communications but their social-media profiles, too. The clue is in Slack’s name, which stands for “searchable log of all conversation and knowledge”.

The good news is that most of the preceding portions of the article talked about the benefits of algorithms in the workplace — fairer pay rises and promotions, improve productivity and so on.

It will be on us to strike a good balance.

3. Are we designing the right social support systems to be able to prepare us?
In a great piece titled “The Robots are coming, and Sweden is fine.” by The New York Times, I found 3 notes fascinating –

While the thought of ~60% taxes in the US would be morally repulsive, it is unclear how long we’ll be able to sustain the current reality.

German Economist Heiner Flassbeck had a powerful graph showing the declining share of national wealth in rich countries (except Norway). 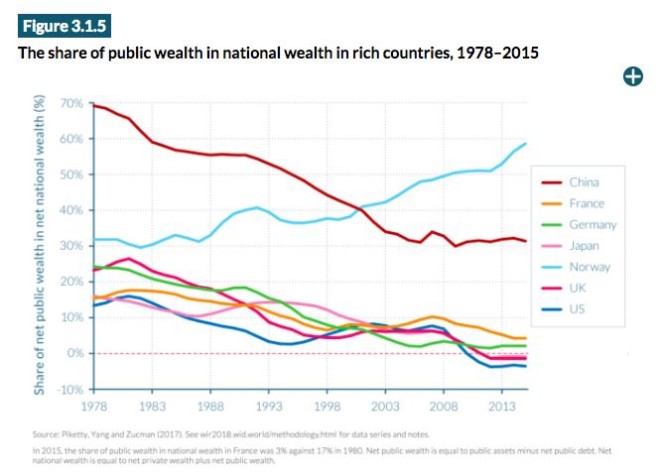 National wealth in the US and UK is now negative. Low public wealth limits the government’s ability to regulate the economy, redistribute income and mitigate rising inequality.

Regardless of Artificial intelligence, income inequality has been rising everywhere.

If AI is expected to further increase the level of inequality, we’ll need to double down on the discussion on social support systems.

For the record, I’m not optimistic that this will happen. Our ability to prepare for changes before they hurt us is poor (see: climate change).

But, I’m hopeful that we can begin by changing how we approach conversations around AI. Maybe next time we hear a conversation about sentient machines, we’ll put a stop to the conversation and focus it on the actual issues like Orwellian uses of data and investing in social support systems to counter inequality. Maybe that, in turn, will mean thoughtful uses of AI in the the organizations we’re part of.

And, maybe, just maybe, we’ll succeed in making the transition to a world with Intelligence augmentation and Intelligence Infrastructure in the coming decades a lot less painful…