When dealing with ambiguity and change, self-talk that relies on variants of “I’m smart enough and will figure it out” tends to produce significantly worse results than a variant of “Not the smartest tool in the shed – but, can be the most adaptable, constructive, and thoughtful.”

While the former points to a desire to find better answers quickly, the latter leads to better questions.

And, while better questions are more valuable than better answers even in normal circumstances, they’re many times more valuable in periods of change*.

We all remember days when we did a poor job / failed / got feedback about something we needed to fix. These sorts of moments typically get stuck in our heads – they have a visceral quality.

While these can be helpful in preventing mistakes from time to time, a better approach to shifting our performance up is to take note of what good looks like. What were days when we thought we did well? What did we sound like in those presentations and meetings? How did we feel post-facto?

Once we know what these look like for us, we can both use it to understand how we’re doing at the present moment while also using it to understand what we need to do to level up and set a new bar for ourselves.

Self talk that says – “Don’t do that – remember the last time you failed miserably?” – is limiting. We get more traction when we replace it with – “You were off your best game yesterday. What were a couple of things that didn’t work? How can we do better today?”

The advice “be kind to yourself” tends to resonate with a lot of folks (me included) because of our default tendency to be harsh with ourselves. For years, however, I found myself wishing I’d find an easier way to remember it in the moment.

A model I’ve begun using to better translate this powerful idea reframes it around the question – who does your self talk sound like? I’ve picked three characters my self talk tends to sound like depending on the day. It could either be harshest critic (“that was a dumb move”), spectator (“hey, what happened there?”), or coach (“let’s talk about what happened there and what you’ve learned from it”).

You could imagine other characters across the spectrum- mom, close friend, critical friend, etc – depending on your natural tendencies.

Thinking about self talk from the lens of these characters and reminding myself to channel the coach more often has made it easier to implement “be kind to yourself.” Here’s hoping it stays.

If you have ideas/models/habits that work well for you, I’m all ears. 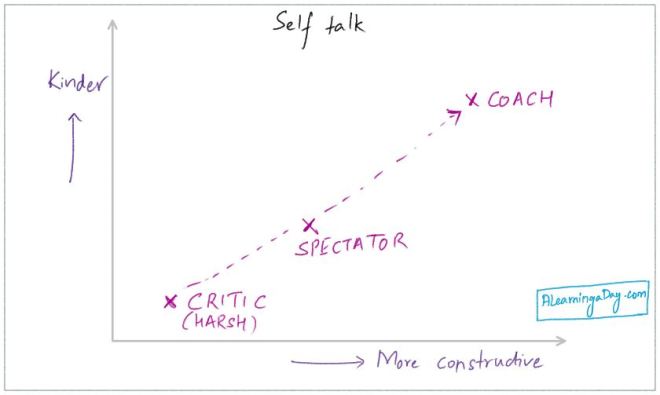 Asking yourself to stop complaining or to stop worrying today is futile. If you are in the habit of worrying, it will be several weeks or months before you learn to break that habit. A blanket ban is just a frustration creator. As you get more frustrated, the self talk will get worse. And, at some point, you’ll label yourself incapable and move on to the next futile quest.

A better question, then, is to just make it a habit to ask – “Is this worth it?” If you are worrying about something you really shouldn’t be wasting energy on, the question – “Is worrying about this worth it?” – should prompt you to re-examine your approach to solving the problem. Of course, worrying or complaining isn’t an approach that helps solve any problem. If anything, they cripple your defenses. But, that’s the sort of logic that’s beside the point when you are worrying (or complaining).

Trevor Noah, on the Daily Show, nicely shared that you can’t win an argument with a toddler on facts. They’ll just make up ridiculous facts. You win arguments by asking the toddler to elaborate. By asking questions and opening a dialog, the toddler soon realizes that what he/she is saying makes little sense.

In debating with our emotional side, we are engaging with our inner toddler. So, by asking “Is this worth it?,” we open a dialog with ourselves. This isn’t about solving the problem. It is about asking the question and making progress.

Bit by bit and question by question is how great things are done.