Earth Overshoot Day is the day in the year when we use more of the planet’s resources than it can regenerate. The first such day was December 24, 1971. This year, it was on August 8.

“The planet has been through a lot worse than us. Been through earthquakes, volcanoes, plate tectonics, continental drift, solar flares, sun spots, magnetic storms, the magnetic reversal of the poles … hundreds of thousands of years of bombardment by comets and asteroids and meteors, worldwide floods, tidal waves, worldwide fires, erosion, cosmic rays, recurring ice ages … And we think some plastic bags and some aluminum cans are going to make a difference? The planet isn’t going anywhere. WE are!”

The environment has largely served as a thorny issue in the past generation’s narrative. There is still a massive contingent of people who think it is all a conspiracy. The problem with pointing to everything as a conspiracy is the same as the boy crying wolf – when the wolves actually do come, you are doomed.

It is certain to be the dominant issue in the next generation, however. Maybe it’ll help if we renamed the issue from “Save the environment” to “Save humans?” 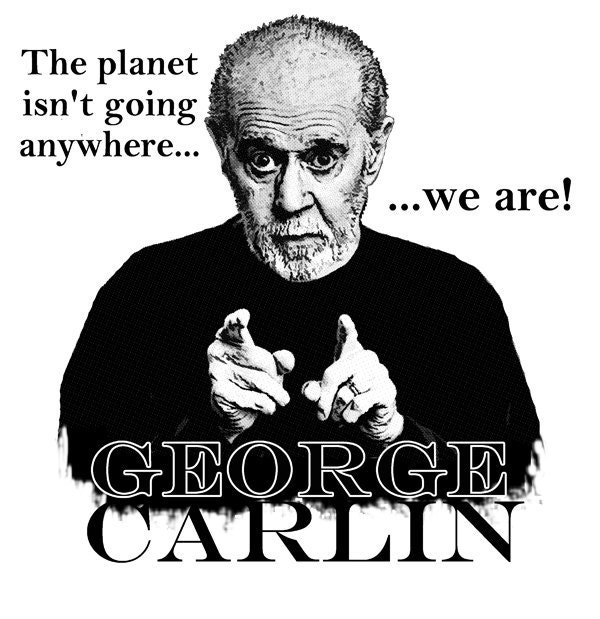 Thanks to Etsy for the image

PS: If you are wondering what you can do – pick 5 out of this list to reduce your carbon footprint and be more conscious of energy consumption in your home and the office. This isn’t about the environment. This is about us…
—
HT: Elijah Wolfson from the Quartz Newsletter for writing about this