As Allied Planes in World War II were being shot down at a devastating rate,  the US Air Force wanted to reinforce the planes with armor. However, every pound of extra armor took away the attack capacity of the planes. The person tasked with solving the problem was Abraham Wald, a Romanian Jew who’d fled the Nazis to become a Professor at Columbia University. He was recruited in the US Army efforts in World War II as part of the Statistical Research Group.

The Air Force supplied Wald with the data available – number of bullet holes grouped by their location on all the planes that returned to base. Most bullets were around the tail gunner and the wings. So, the army suggested reinforcing these regions with armor. 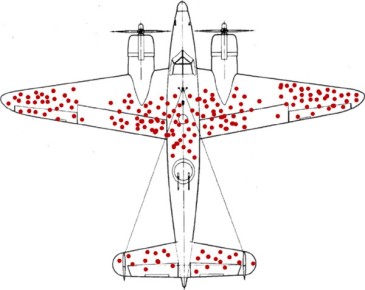 In what has become a legendary piece of analysis, Wald disagreed. He noted that the fact that the planes had survived despite these injuries suggested these areas needed no reinforcement. All the other planes had likely been struck elsewhere – the engine and the cockpit for example. Those were the areas that needed to be armored.

Wald gave us survivorship bias. In simpler words, he reminded us to look for insight by being very mindful of the data that isn’t in the room. And, as I think of a recent error that rose from jumping to a conclusion with available data, I realize I must spend more time channeling Abraham Wald.