Arthur C Pigou, a British economist, wrote an important book called “The Economics of Welfare” in the 1920s. His argument in the book was that industrialists seek their own “marginal private interest” and have no incentive to internalize “marginal social cost.”

To illustrate this with an example – let’s imagine that an industrialist builds a factory in a previously quiet neighborhood. This factory will likely cause congestion and pollution. But, the contractor doesn’t get affected by these costs if all he does is pay rent.

Of course, this is all not academic. This is a graph of the amount of energy used by Bitcoin miners. In March 2017, Bitcoin miners used double the energy consumption of Nicaragua. This graph has continued to move upward with the surge in crypto activity in 2017. 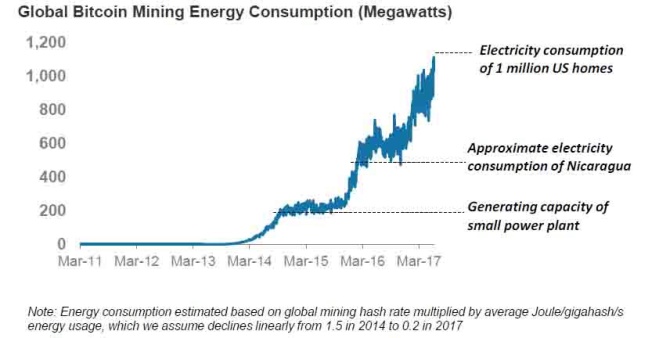 The current estimate is that Bitcoin miners use as much electricity as all of New Zealand.

So, why still do so? Because it is still profitable. Or, to think of it as Arthur Pigou might have, it is still profitable sans the marginal social cost. The environmental footprint of this energy consumption makes no sense. But, that is at the heart of understanding the concept of negative externalities.

Pigouvian taxes. Arthur Pigou’s solution came to be known as a Pigouvian (or Pigovian) tax. This is a tax on any market activity that produces negative externalities. This is why we tax alcohol and cigarettes. Taxes are a very efficient mechanism to reduce negative externalities and prevent over consumption as it deters over production/consumption.

However, there is one important underlying assumption with Pigouvian taxes – they work best when our estimates of costs and benefits are correct.

As we all know, short term costs and benefits are far easier than measure than long term costs and benefits. And, given the fact that adding taxes is a sure shot strategy for a politician to give up hopes of re-election, it takes a really long time for us to tax areas where taxation would otherwise be an obvious solution.

Hence, we live in a world where there is no tax on sugar in carbonated drinks or on Carbon emissions – even though both have been shown to be harmful to us.

Regulating technology. The biggest challenge with regulating any businesses at the cutting edge is that it is unclear, for long periods of time, what negative externalities are. For example, even if it was evident to many individual users that using Facebook didn’t their improve mental well being, it wasn’t commonly accepted.

Now, of course, Facebook’s executives have admitted that Facebook was not the best way to use your time. And, they’re making changes to the news feed to fix that.

It is still unclear what the long term benefits of being addicted to social media are. I was in India recently and found myself surprised at the extent of the Whatsapp addiction amongst adults. My guess is that we’ll look back at these times the same way many look back at smoking in the US in the 1960s (i.e. we’ll ask – how the hell did we allow ourselves to do that?)

Of course, it is easy to point fingers at Facebook’s executives and accuse them of “hacking” our brains. But, they were people like you and me responding to financial incentives. The problem, more likely, is a blind belief in capitalism.

Unbridled. Seth Godin (who authors the best blog I’ve had the privilege to read) had a powerful post titled “Unbridled.”

There’s a school of thought that argues that markets are the solution to everything. That money is the best indication of value created. That generating maximum value for shareholders is the only job. That the invisible hand of the market is the best scorekeeper and allocator. “How much money can you make?” is the dominant question.

And frequently, this money-first mindset is being matched with one that says that any interference in the market is unnecessary and inefficient. That we shouldn’t have the FDA, that businesses should be free to discriminate on any axis, that a worker’s rights disappear at the door of the factory or the customer’s at the lunch counter–if you don’t like it, find a new job, a new business to patronize, the market will adjust.

Taken together, this financial ratchet creates a harsh daily reality. The race to the bottom kicks in, and even those that would ordinarily want to do more, contribute more and care more find themselves unable to compete, because the ratchet continues to turn.

The problem with a race to the bottom is that you might win. Worse, you could come in second.

There are no capitalist utopias. No country and no market where unfettered capitalism creates the best possible outcome. Not one. They suffer from smog, from a declining state of education and health, and most of all, from too little humanity. Every time that the powerful tool of capitalism makes things better it succeeds because it works within boundaries.

It’s worth noting that no unbridled horse has ever won an important race.

The best way for capitalism to do its job is for its proponents to insist on clear rules, fairly enforced. To insist that organizations not only enjoy the benefits of what they create, but bear the costs as well. To fight against cronyism and special interests, and on behalf of workers, of communities and education. That’s a ratchet that moves in the right direction.

Markets fail. The post is both poignant and powerful and drives home an important point – markets fail. Capitalism fails. There is no cure all.

Facebook’s recent admission was in contrast to the rise of their stock price (up and to the right). Bitcoin’s rise doesn’t consider the immense cost of electricity used to mine it.

These are just two examples of market failure in technology – among many.

As Arthur Pigou foresaw in the early 1900s, the challenge with capitalism is that it drives rational humans to irrational extremes because it doesn’t require them to internalize social costs. That’s why Pigouvian taxes matter. Taxes remind us of the negative externalities we create.

This isn’t a corporate thing either. Aeon had a thought provoking post asking the question – what would happen if we were all taxed on our energy footprint?

As I grow older, I realize that the best way to predict human behavior is to take a look at the incentives. In the absence of self awareness (and there never seems to be enough of this flying around), we are our incentives.

We aren’t incentivized to think of the negative externalities we create. But, it matters that we do.

Taking more responsibility. For those of us either working in tech or aspiring to work in tech, it is so critical we think of these incentives and the behavior it drives. Once you are in an industry and environment that is growing, it becomes clear that the hard thing isn’t about making the next buck. It is about asking – “but, at what cost?”

It doesn’t have to be this way. Shareholder value need not be what we maximize. We just need to care enough to have the tough conversations around the consequences of what we do.

(For my part – for every few posts where I gush about the prospects of artificial intelligence, the blockchain and so on, I’ll make sure I intersperse rants like this one to question blind beliefs on the brand of capitalism we take for granted. Thanks for reading this far.)
—

Quick note on these technology notes: This is a bi-weekly post as part of the “Notes by Ada” project. I send these as a weekly newsletter and experimented with posting these elsewhere. But, I’ve decided to share them on this blog one week after the newsletter goes out.