One of our morning activities on holiday in a new place is to have a discussion about what we’d like to do that day.

(We like to leave plenty of buffer time in our schedule for relaxed starts and generally avoid booking too many things in advance. This approach has its trade-offs – but, we’re comfortable with them.)

Ergo the morning discussion on what we feel like doing during the day. The crux of the discussion tends to revolve around the trade-off between breadth and depth. Should we do more? Or less but better?

There isn’t a right answer to this. On some days, we choose breadth and, on others, we pick depth. I notice we pick depth more often than we do breadth. But, on reflection, it isn’t the specific choice that matters as much as the discussion of the trade-offs and the explicit choice that follows that discussion.

There’s never a perfect answer to how to spend a great day on holiday. If we’re lucky, we may find the perfect answer given our constraints and preferences.

It applies just as well to a day on holiday as it does to any other day in our lives.

Whenever we’ve had the opportunity to visit a new place, we get a glimpse of the culture of the place when we’re out and about. There’s a certain rhythm to how things are done – the way people drive, the way pedestrians walk, and so on.

Even if we don’t understand why, it is generally helpful to adapt quickly to the norms of the new place (at the very least, it helps avoid stares or honks :)). As a species, we’re wonderful at mimicking each other. So, it isn’t hard to follow “When in Rome, do as the Romans do” – but, it does make me marvel at how easily norms carry over to a new visitor.

On the one hand, it reminds me of the idea that we must fit in before we stand out. In new cultures, it is better to show you’re capable of being an insider before attempting to inspire change (assuming it is necessary).

On the other, it brings to the light the power of culture in any organization. When new members of the organization arrive, they look around to understand how things are done.

The big question, then, is – in our families/teams/companies/neighborhoods, what will they see?

…to the people who gave us a break when we most needed it.

…to the people who love us and inspire us every day.

…for the many wonderful things that we take for granted on a daily basis.

Of course, it doesn’t just have to be on this day. It could be every day.

Today, then, is just a reminder to make gratitude a daily practice.

In the age of smart speakers, is the Top 50 most played on Alexa the new Billboard 100?

If you are looking for something to get offended about, there’s no lack of possible stimuli. A few minutes spent on Twitter or any social network with pseudonymous identities, for example, will do the trick. There’s also no dearth of sensationalist news headlines that exist to do just that.

Racist (or otherwise) celebrities on Twitter, news channels, and many other forms of media feed on our attention. And, the easiest way to capture that attention is to sensationalize or offend.

The fact is – there’s a lot of stuff out there that sucks. And, at any given point, there are also a lot of people out there who’d rather not have folks like us doing what we do.

But, there’s little to be gained by focusing on that. We maximize our contribution by shutting out all that noise and keeping focused on work that matters.

In the short run, that helps make our world better. And, if we’re consistent and lucky, that may be our best shot at making the world better in the long run as well.

Growing up in particularly nerdy schools, we used to have stories float around about some of our peers’ magical academic abilities – e.g. person X remembered a page by just looking at it for a minute.

These stories and an obvious absence of said magical abilities inspired an observational study of sorts through multiple interviews and conversations over the past fifteen years. The exceptional individuals studied were well represented across fields (e.g. music, research, parenting, venture capital) and I’ve found 3 things to be true –

1. They cultivated a passion for a craft/topic that they had some innate aptitude for
2. They then learnt to focus by saying no to nearly everything (typical exceptions were one or two out of health, family, friends, or a hobby) outside of their craft
3. And, finally, they worked obsessively toward getting better – this obsession generally showed itself in long hours that, over time, felt more like play than work.

The other interesting finding was that exceptional ability didn’t guarantee happiness. Happiness seemed to elude those that applied these abilities for extrinsic reasons (satisfy others/earn a reward/prove a point) and, instead, embraced those who found meaningful intrinsic reasons for doing the work.

When we experience pain and learn to soak up the lessons from that pain, we accumulate perspective.

Perspective is an interesting force. It doesn’t help us solve problems – we rely on our intellect for that. What it does instead is act as an amplitude reducer.

When we experience a profound low, perspective reminds us that reality isn’t as bad as we think it is. It reminds us that we’ve been through pain before and have emerged better, smarter, and stronger.

Similarly, when we experience a high, perspective reminds us that such highs don’t last. It summons a touch of paranoia by bringing to mind the inevitable fact that there’s likely some pain around the corner.

Perspective, thus, brings equanimity with it. That equanimity, in turn, enables us to focus on consistently approach every day with the intent of approaching people and work with extraordinary care.

In the short run, it is hard to tell if a good day is really a good day. So, all we can do is keep plugging away and keep faith in the fact that things work out in the long run.

And, perspective is a powerful ally in helping us do that.

The “Our World in Data” blog had an interesting post on the importance of personal relationships on economic outcomes. They worked off a study that analyzed the impact of the fall of the Berlin Wall to the growth in incomes across Germany. Below is an excerpt.

After the fall of the Berlin Wall in 1989 there was growth in incomes across Germany as a whole; but the interesting finding from Burchardi and Hassan is that income growth for households in West Germany who had ties to at least one relative in the East was much higher – six percentage points higher – than that of comparable households without such ties.

Burchardi and Hassan argue that West German households that had ties to East Germany had a comparative advantage in seizing the new economic opportunities in the East. Having personal relationships with East Germans gave them access to valuable economic information – information regarding local demand conditions, and about the quality of East German assets that were offered to investors.

These gains from social connections actually added up at the regional level. West German regions that had a higher concentration of households with social ties to the East, enjoyed substantially higher growth in incomes in the early 1990s. A one standard deviation rise in the share of households with social ties to East Germany in 1989 was associated with a 4.6 percentage point rise in income per capita over six years.

The other interesting stat was a study from the Pew Research center that looked at how Americans found jobs in 2015. 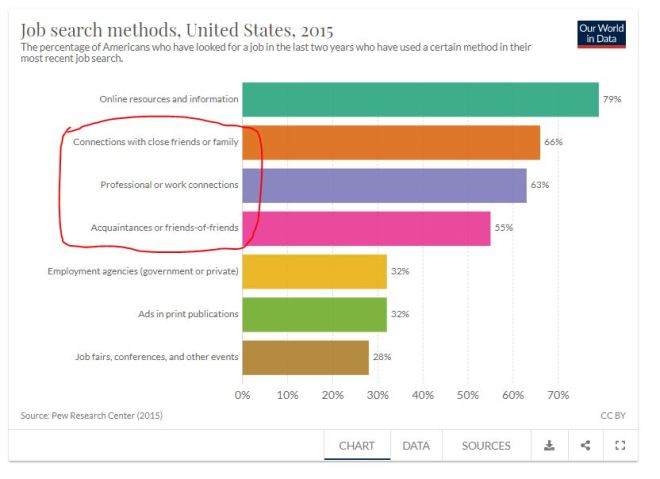 Two things stood out – ~80% of Americans used online resources and information in 2015. I wonder if that number has gone up to 90% in the 4 years since.

And, second, 60%-70% of Americans mentioned connections in various ways – close friends or family, professional or work connections, and acquaintances. While this finding isn’t at odds with the use of internet tools thanks to the presence of social media, it speaks to the importance of networks in our ability to better our economic standing.

As someone who has been a beneficiary of these very networks, I find myself both grateful for the impact it has had on me and thoughtful about all the work that lies ahead to make these networks more accessible for those that really need it.

All Things Ergo has a useful graphic on the right way to sit and stand while working on a computer.

For those of us who spend significant time working on our laptops, there are a lot of small details in here that are worth paying attention to.

The more we do it, the more important it is that we do it right.

“If only we had more time/money/resources” is a natural go-to refrain from time to time.

Of course, it turns out that the better thing to do is to replace it with the question – “But, what am I doing with the time/money/resources I have at hand?”

It is a better and more important question for two reasons. Creativity shows up in the presence of constraints. And, more importantly, if we can’t get the best out of the resources we have, why should we be trusted with more?